Last-mile commuting with an e-scooter 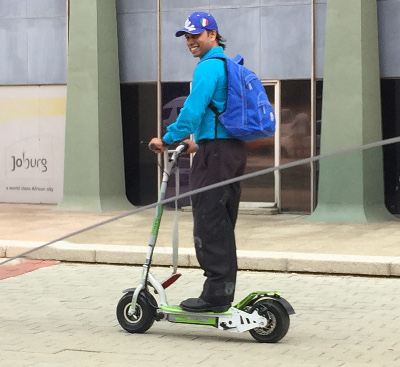 I've been using an e-scooter to get to and from public transport, and it's liberating!

It started with me wanting to, in true Mustachian fashion, bike to work. Unfortunately, this isn't very practical in my daily commute, because of distance (over 30km one-way), and my use of multiple modes of public transport (bus and train). While I could try a folding bike, I wasn't completely sold on this idea due to the unwieldiness of it. (UPDATE: I now have a folding e-bike as part of my mixed-mode commute)

Then one day (around August 2016), I saw a kid's toy: a folding e-scooter, the Uber Scoot S300. This was affordable (R4500), however the weight of over 18kg made it seem impossibly unwieldy for carrying around a train station. Eventually, after much research and deliberation, I decided to give it go anyway.

I soon realised that I needed to modify the e-scooter to:

Thus began my adventures in modifying the e-scooter. I added the carry strap, moved the heavy lead-acid batteries into a backpack, making the e-scooter much lighter (around 13kg) and easier to carry, and my wife made a nice bag to put the e-scooter into. I later swapped the lead acid batteries (that weigh around 5.5kg) for an RC LiPo pack (weighing about 1.1kg). I even designed and 3d-printed a rear mudguard to avoid muddy trousers!

Today I did my #escooter #commute with @TheGautrain and it was great! Definitely needs a wheelie bag. Lots of curious onlookers. pic.twitter.com/2aMGoIgEUM

Another mod: Designed and #3dprinted a rear mudguard for my #escooter. Hopefully no more muddied trousers. pic.twitter.com/vLZBUCxm9X

This is how I roll. To and from @TheGautrain #escooter #emobility #joburg pic.twitter.com/etImyMyHbM

I get a lot of attention while I scoot around to and from work! I have yet to see one other person try this form of transport here in Johannesburg, which is sad, because it is cheap and fun, and we have cycle lanes! Here are some common responses:

Around July of 2017, I spotted this beauty in the window of a local nondescript gadget shop: 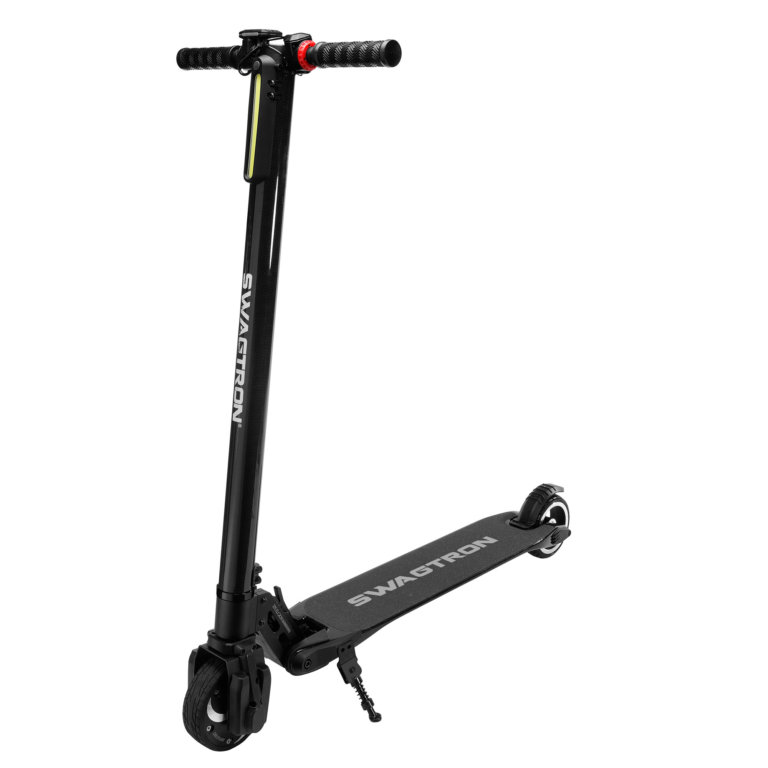 Well, not exactly that model: this one has an aluminium deck, and is not branded. I was concerned about the lack of suspension and the tiny wheels, but after watching many YouTube videos, I decided to buy it. And then, there were two...

Bought another #escooter. Easier to carry on #gautrain but rides like a skateboard. R3200. Lithium battery. Regenerative braking. pic.twitter.com/7idhqm57nS

In short, this e-scooter is only usable on smooth, dry, tarred lanes for fairly short rides. It is quite unstable due to lack of grip, high stiffness, and tiny wheels. Still, I find that I use it when I only need to ride it in town, on the smooth cycle lanes.

I'd pre-ordered a MudSlinger e-scooter way back in April 2017 after reading this Popular Mechanics article about it. I got in touch with the creators, who were very friendly and willing to listen to my advice regarding what an ideal e-scooter should be. Eventually, by September 2017, I got a review unit from them. And then, there were three:

I added a few modifications - a carry strap, and an extended rear mudguard to avoid muddy pants: 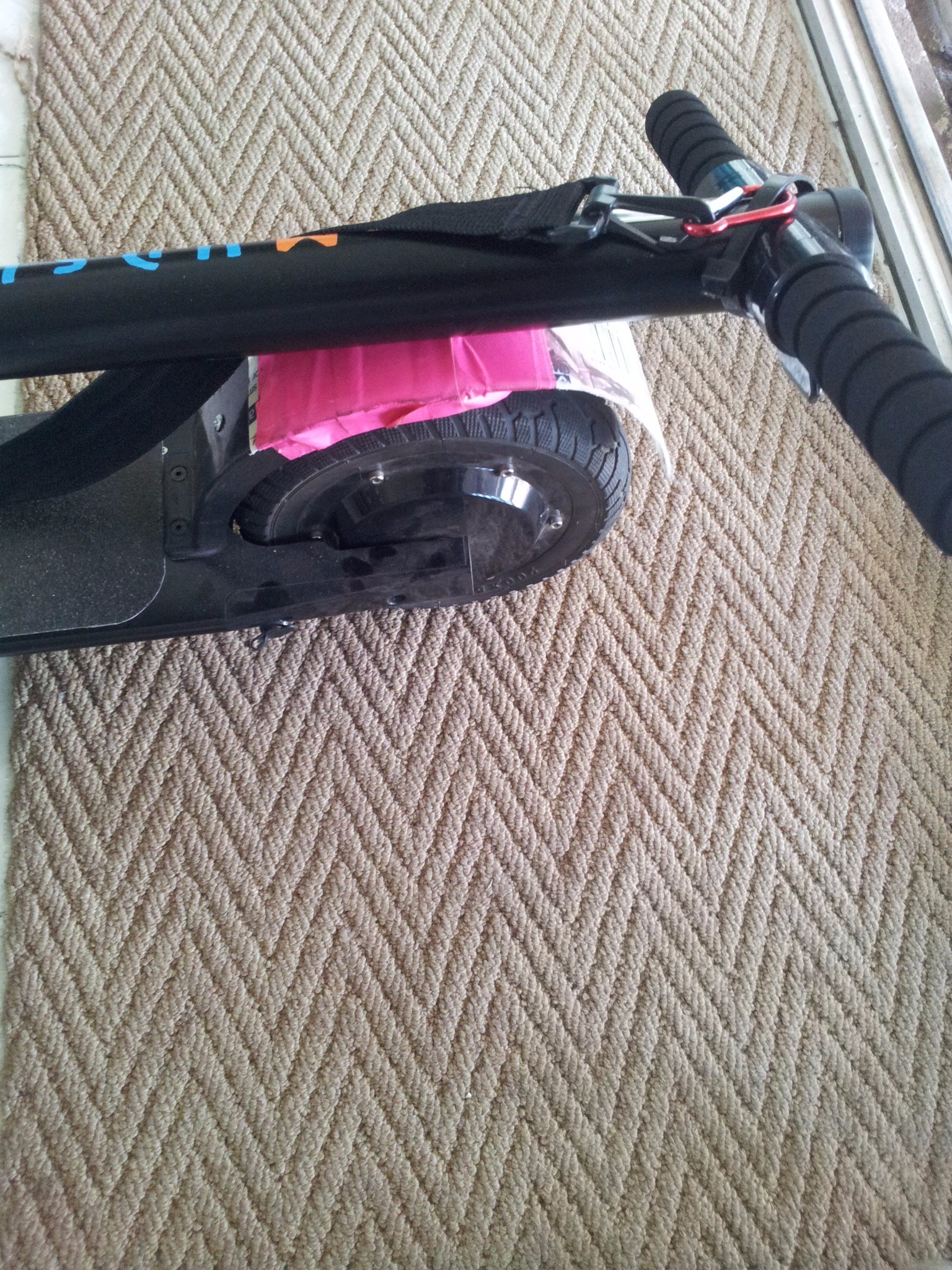 In short, the MudSlinger e-scooter is the one I'd recommend!

After almost 1500km of riding over a year, a few things broke:

Hopefully the updated models have resolved some of the design issues. This scooter is now available at Sportsmans Warehouse.

In October 2019, I got the latest model of the Mudslinger e-scooter - the Mudslinger GoSmart Explorer Electric Scooter, which is available from Sportsmans Warehouse for R5300. 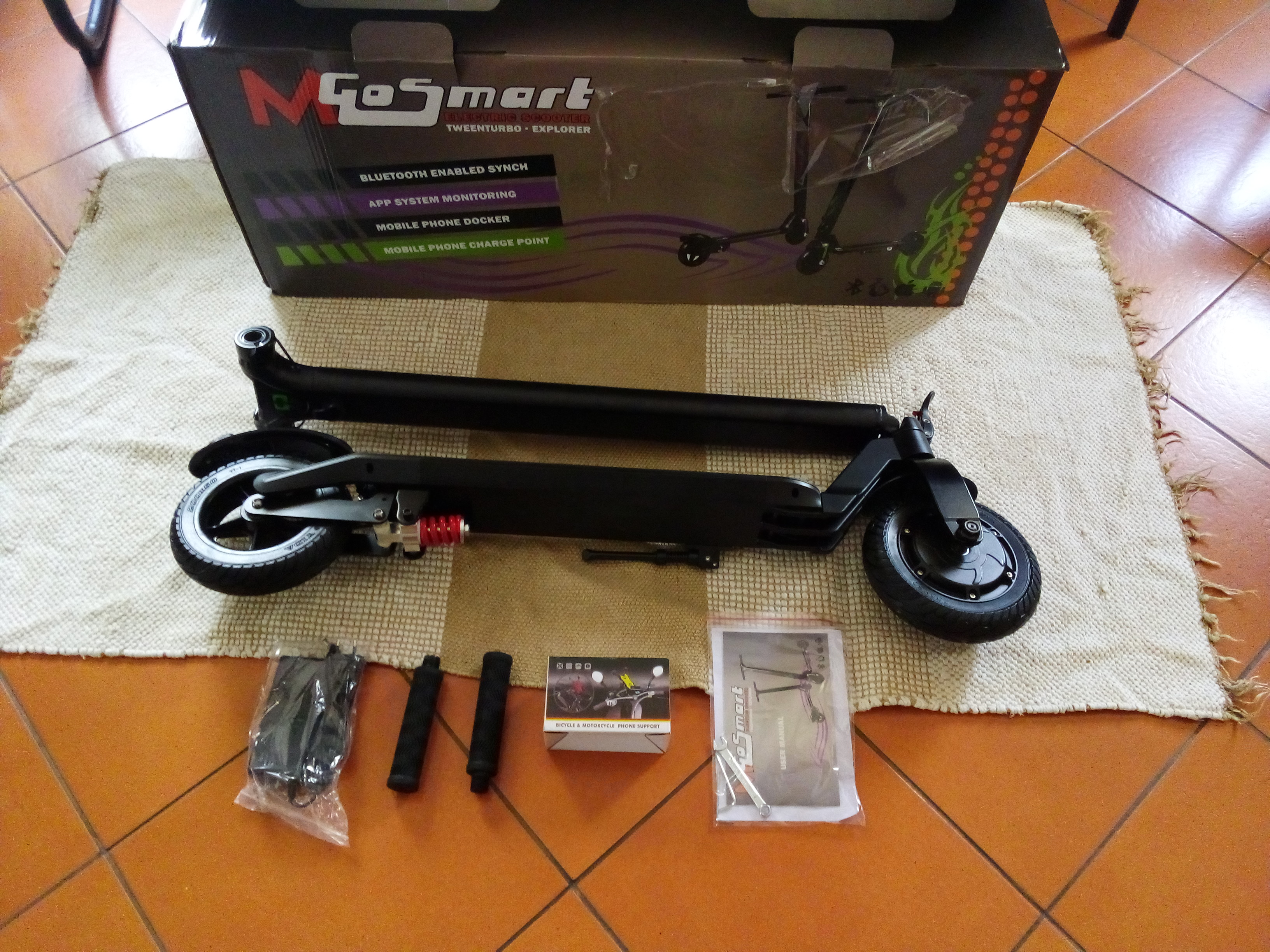 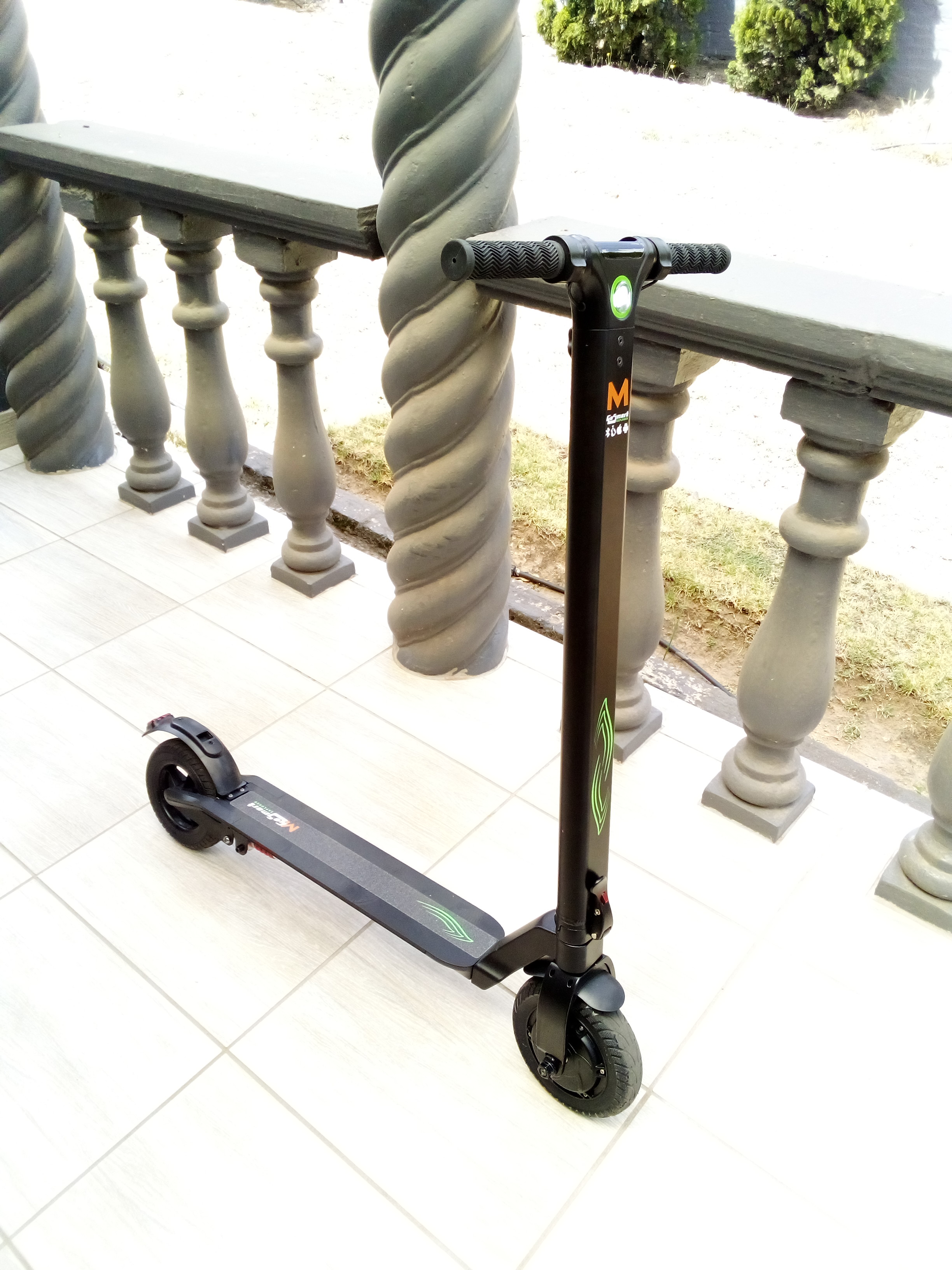 In addition, this e-scooter features a USB charging port, and bluetooth, allowing you to pair it with an app on your phone, which is most useful for diagnosing any problems, but not for much else. There isn't any lock/unlock feature, nor the ability to view detailed battery stats, but that's OK. The e-scooter is perfectly usable without the app. The display readout on the handlebar shows all the important information (speed, charge state, mode, etc.), although it is not readable in direct sunlight. 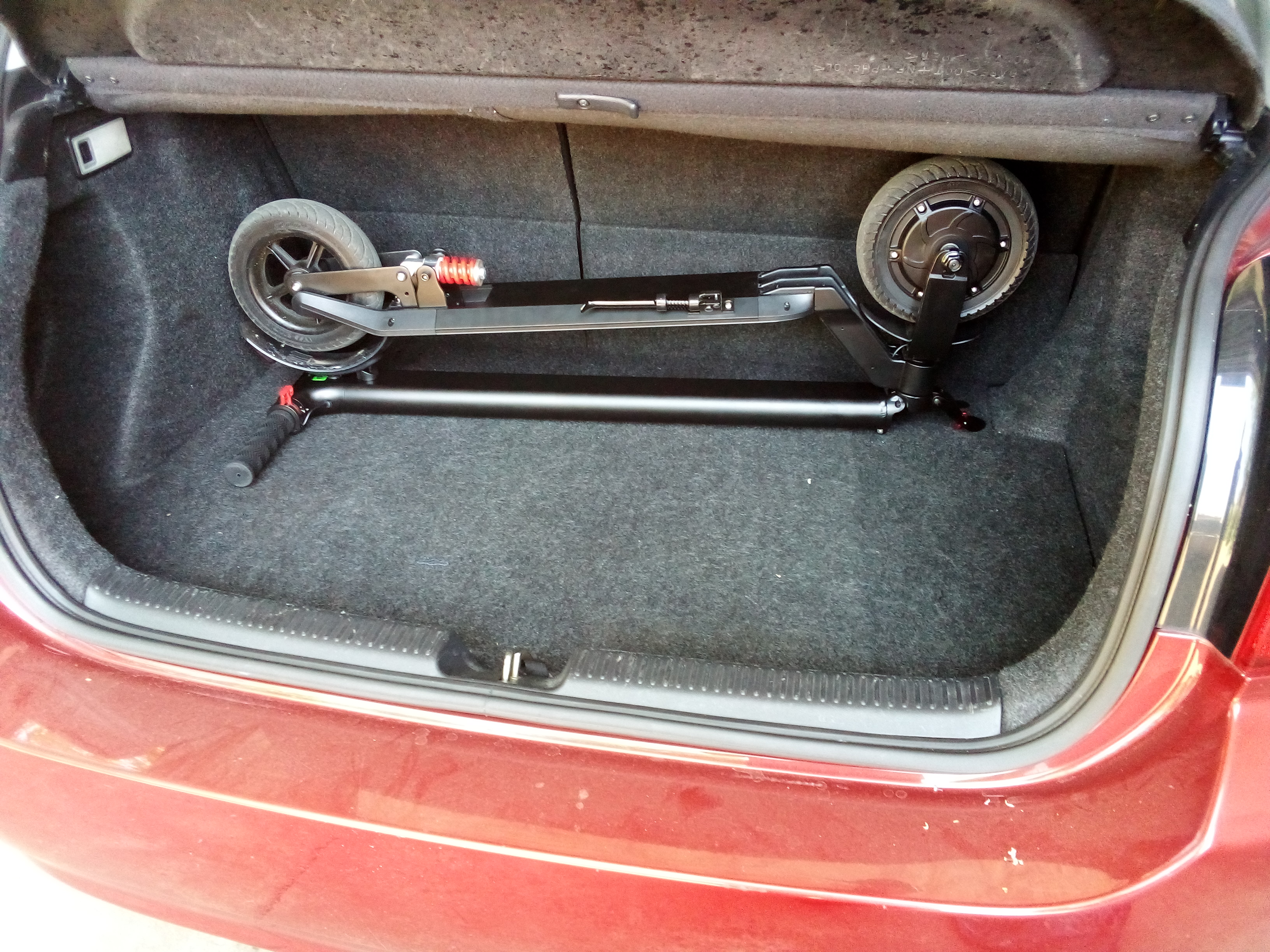 This is still a compact and relatively lightweight e-scooter that is easy to fold, and fits neatly into the boot of my car. When folded, there is a hook that hooks into the rear mudguard, allowing it to be carried easily. The headlight is an improvement over the previous model (it is angled downwards and inside a reflector assembly), with much better night-time visibility, and the rear light flashes during breaking. The speed control features 3 modes, where mode 1 is limited in speed to about 9km/h, making it perfect for beginners to learn to ride it without the risk of a high-speed crash. The rear suspension makes for a more comfortable ride over the previous model, as it doesn't bottom out (with my weight). It feels like it has longer travel and is stiffer.

Another improvement over the previous model is the motor. Even though the power output is lower (250W compared to the previous 300W), it is a 36V motor, and thus delivers more torque, and it is much quieter. The top speed may be slightly lower, but it pulls a lot better up the hills!

The only thing to be wary of with this e-scooter is the brake - at high speed, the brake is really sharp and hard to modulate, so you will need to brace yourself and shift your weight rearwards before touching the brake.

In short, the Mudslinger GoSmart Explorer is a really well-built e-scooter that is a major improvement over the older model in all aspects, despite being priced the same! This is my favourite e-scooter yet!

Here's what is looks like, locked up at the Gautrain bike rack: 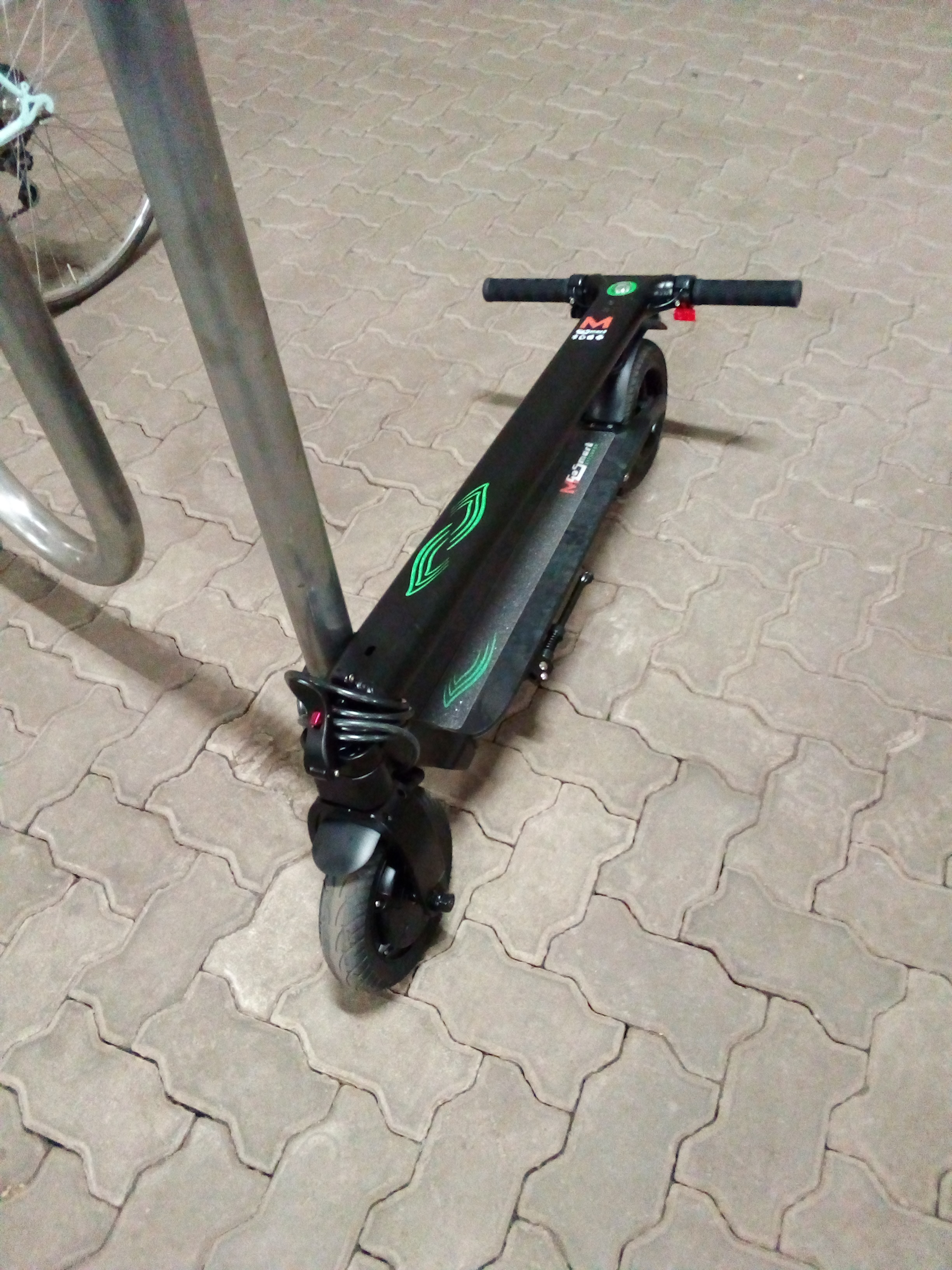 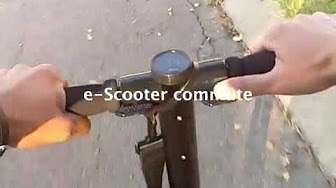 Sometimes, we just ride for the fun of it:

Here are some tips if you're planning to try this mode of transport: